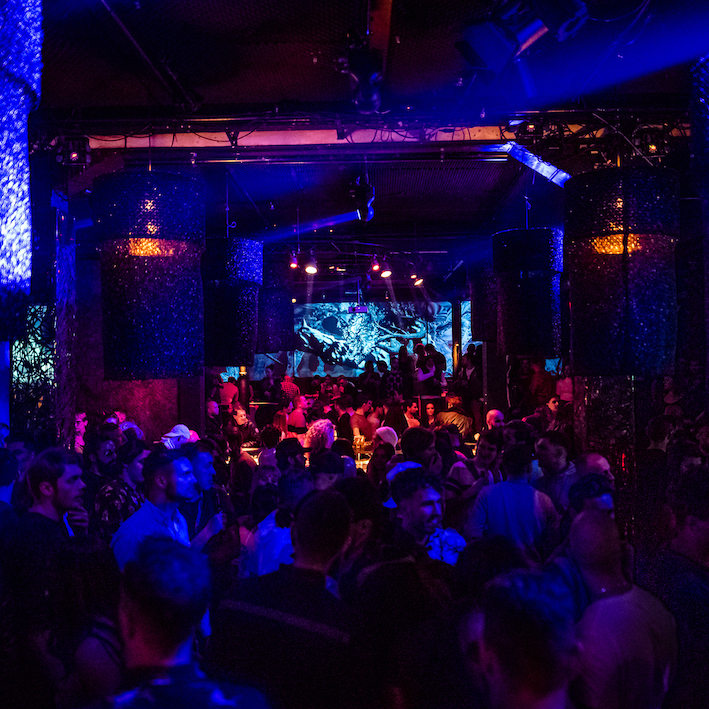 The spring season can’t start with just one flower (yeah, that’s an old Romanian saying, but you got the point :D). Yet, you can jumpstart an amazing underground scene with only one club. Its name is Supermarket and in its 20 years of existence it put Zurich West on Europe’s clubbing map, shaping a unique culture and vibe.

It’s all about the sound, quality and moments!

It’s also about the people who supported the house & techno scene, especially the sound that suit the club environment, away from the huge techno festivals. under the tree, the crew behind the party series with the same name introduced Zurich’s technoheads into the minimal house sound with carefully selected lineups, balanced between established artists and young blood and spiced up with a lot of Romanian selectors.

The Art Of is their newest concept, where only one guest DJs is invited to play all night long, thus offering the crowd the chance to enjoy a longer sonic trip. We had a super nice chat with Arthur from Under The Tree, about the Zurich nightlife, the whole grey situation we’re living in right now and many more. This is what it came out of it 😉 Enjoy!

You’re already in your third year with “under the tree” events, that have featured many Romanian DJs. Does the Supermarket crowd start to enjoy this kind of music?

Hello Ioana, first of all thank you for having us here. Yes, that’s true. slowly people understand it, but it was not always so and it was a long way until we found acceptance and it will be a long way to keep it up.

How did you come up with the idea?

We already had some years of experience with parties and have developed musically in this process. When we reached a certain point and realized that our concept did not match our musical taste anymore, we unstructured and under the tree was born.

What does it take for a DJ to play all night long, in your opinion?

It takes everything. Nowadays many DJs are driven in a certain direction and specialize in one segment, be it for opening, main-time or closing sets. In other words a DJ has to have everything to be able to play an all-night-long session.

Let’s say there will be an artist who would like to play a set longer than 6 hours. What would you do? Can you extend the party?

Yeah, sure. He just needs to feel like it, and so does the crowd, and we’re ready to roll!

As we all know Romanians like to play super long sets, do you think this events series is tailored for them?

Super long sets can be played by many DJs out there, but I have to say that maybe more of those who are good at it are from Romania 🙂

How did the crowd respond to this new concept?

As for the under the tree series, the initially more reserved crowd is now coming out of themselves and responding well to the events. Whether the same happens at Art of … we will see after a few editions, but the launch of the series with you behind the decks was a full success 🙂

Can we call Supermarket as an iconic landmark for Zurich’s clubscene?

Supermarket is one of the oldest clubs in Switzerland and is celebrating its 22nd anniversary this year. The club has been through thick and thin, has experienced hard times and has proven itself time and again. Some of the guests have come once and never left again. The Supermarket now mixes old and new generations from all walks of life, also thanks to us. Under the leadership of Sandro, the club has been steadily progressing and always had the goal to present an absolutely high quality sound. Today the club has become an intra-generational institution in Switzerland to promote a high-quality music experience for its guests. In other words, yes, the club is an iconic landmark of Switzerland and since the refurbishment even far beyond its national borders.

Talking about Zurich: if we want to do a bit of crate digging, where would you recommend us to go?

Super simple question. There’s only one place to go in Zürich : Sihl Records from our good friend Andreas Ramos!

What do you think it’s going to happen on the European clubscene with this critical situation we live these days?

This is a question that has been occupying us and the whole scene for a long time. We already had to cancel two parties and it will surely become even more. One of the main things that this crisis has shown us is certainly the instability of the whole event industry.  My biggest concern is not that we won’t be able to throw parties anymore, but more about the many people who depend on them. As a result of the federal government’s decision, around 160 companies with more than 2,000 full-time jobs in the city of Zurich are affected. By the end of April, a loss of income of 20 million Swiss francs, the cancellation of 2,000 cultural events and over 4,000 bookings from artists are expected.

These are of course only the actual figures, behind most of the employees is a whole family, which gives us food for thought. But we are very lucky and are supported by our government. Nevertheless, it shows just how unstable this market, on which so much depends, is. To this one should add that Zurich is the city with the highest club density in the world and every Zuricher stick to his party culture, which even in Switzerland is considered an UNESCO intangible cultural heritage. Predicting the future in such turbulent times is almost impossible. Nevertheless, I am convinced that the clever minds of our country will quickly find a solution, Zurich without nightclubs is almost like Venice without canals…

Is it hope it will come back at some point?

To a certain extent I hope that the situation will normalize, but if you look at the development of our scene since the beginning you will realize very quickly that our music and music in general has often been created out of crises and used as a means of revolution. In the last years there was no more reason to rebel or to survive a crisis. This is reflected in the commercialization of electronic music. Maybe our scene needed this pandemic as a wake-up call, maybe the whole world needed it… I don’t think we’ll come back to the same point, but we’ll get to a whole new one 🙂

3 records that could define an Art Of clubnight

caLLy – Illusion Of The Self

Tell us a crazy story from a party 😀

Our label launch at Christmas 2017 was probably the craziest party ever. we had planned a 33 hour long, 3-day label launch for under the tree with several international acts like Ferro, Jan Krueger and many more. On day X when the party started everything was good, the first night was great, everybody had fun. The next morning most of the international acts arrived, but during the day the people left the club, and nobody was at our party anymore because it was just too much for the people to party for so long. They just weren’t used to it. All day long we had no guest and at some point, in the afternoon Sandro (the manager of the club) said we would close the second night. For Romano and me a world collapsed. All the artists arrived, and we told it to them. Of course, the mood was devastated because everybody was really looking forward to this party.

So, we all went out to dinner together when suddenly Sandro jumped up and said: “We’re not going to let this happen! Arthur write to all your people, Romano write to you and I’ll call a doorman and go behind the bar myself”. So, we jumped up from the table and without hesitation directly into the club. We started the party again and suddenly word got around and people came from everywhere. That was surreal! I can still remember how I made a “we are open” sign with Jan Krueger from old posters and tape to put it in front of the door (I still have that at home). In the end Ferro, Jan Krueger, Reiss and Frank Haag played an all night long b2b that I will never forget again. The whole 33 hours were an emotional rollercoaster ride that laid the foundation for today’s series. In retrospect I could not have wished for a different start and at this point I wanted to thank all the people which supported us in every single move we did. Without you there would be no us! See you under the tree…