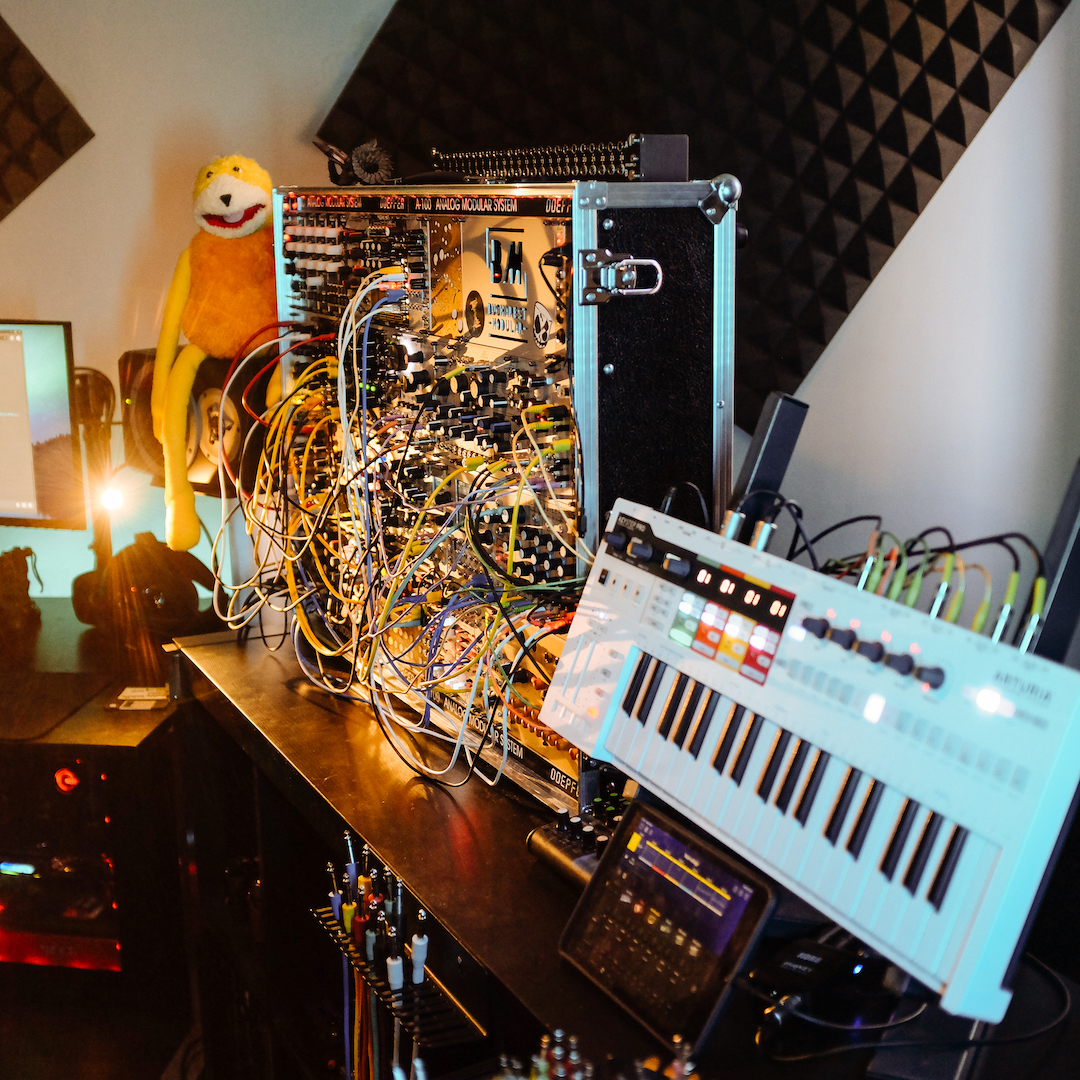 Once you’ve chosen the path of electronic music production, be prepared to enter the vast ocean of software and hardware, with no guide to help you get through it. As you probably know by now, the majority of producers are selfish beings, working all alone in thier studios and hardly sharing any of their knowledge around. You have to meet the right persons at the right time. You need to be part of those secret Telegram groups or those hidden Discord servers, you need to know the admins running some exclusive Facebook groups to have access to more experienced producers who could give you a helping hand.
Yet, there is hope for young producers. Meet Marian aka Dualtrx, an eletronic music producer based in Bucharest, whose passion for building modular setups pushed him into running Bucharest Modular, an online community aimed at sharing modular knowledge between like minded producers.

Without diving into a very technical discussion (you can join Modular Bucharest if you feel the need to go deeper into details), we sat down for a very relaxed chat with Dualtrx about his journey as an electronic music producer, centered around modular.

What was your first production setup?

I think it was the late 90’s, like many other kids that discovered computers. My first production setup was a PC with FastTracker in MS-DOS. After I discovered Windows I was very into ReBirth RB-338 and Fruity Loops which I used until today. I got into hardware very late in my musical journey, because I didn’t have access to synths and of course I couldn’t afford it. My first keyboard was a basic Yamaha, and my first hardware synth was a Novation X-Station.

When did you start getting into modular?

I think it was back in 2016? I can’t remember well. I started with some semi-modular synths, and after that got into eurorack.

How much is passion for DIY and how much for electronic music production?

I never did DIY for eurorack or any other synths, I prefer using them to building them. I’m more drawn by the music production of electronic music, I think…

Let’s say I am a rookie producer, with strong Ableton skills, I’ve just started to play with some analog gear and want to make the move towards modular. Where do I begin? Give us 3 sources of information that explain very clearly the basics of a modular setup.

A modular synth is something personal. The ability to make your own synth just wasn’t possible not long ago. Modules are usually chosed according to one’s own preferences. What’s good for me isn’t necessarily good for you or somebody else. Eurorack is something that’s learned step by step, with every module and of course depends on the space you have for those modules.
I would start this journey with semi-modular gear, like Moog Mother32, Dreadbox Erebus, Make-Noise 0-coast, etc… That way you can see if it’s for you. Not everybody has the patience and time to make a patch in eurorack. It’s very time consuming and expensive. And from there you can expand to a bigger euro case and add some basic modules depending on your needs. Eurorack is great for choosing different filters with different character and specific effects for example. You can build a nice filter/effect box for other non-eurorack synths.

3 records or tracks that are catching the essence of a modular setup studio.

Dunno for sure, I don’t listen to music according to what hardware/software the artist used. But if i were to choose some well known contemporary artists that use eurorack for their music it would be Venetian Snares, Alessandro Cortini, Richard Devine, Datach’i, Suzanne Ciani and more.

3 pieces of gear that are essential for any modular setup.

A case with good power supply filled with modules, a good soundcard for recording, not necessarily multitrack, depending on the setup and what you need (something like the ES-9). Also a good pair of speakers or headphones.

You created the Bucharest Modular facebook group a few years ago, thatturned into a pretty active community. Do you have plans with this group?

I love bringing people together for the purpose of music. I’ve been into the local community for a long time and I’ve also organised parties and other events. The group was made entirely to bring local artists and gearheads together, to learn from each other and share in our passion for music. That’s why we’re doing an event every year called Bucharest Modular Meet. It’s a day-long event where people can bring their gear, talk and of course make music live. It’s a free event whose main objective is to get people together so the local community can grow.